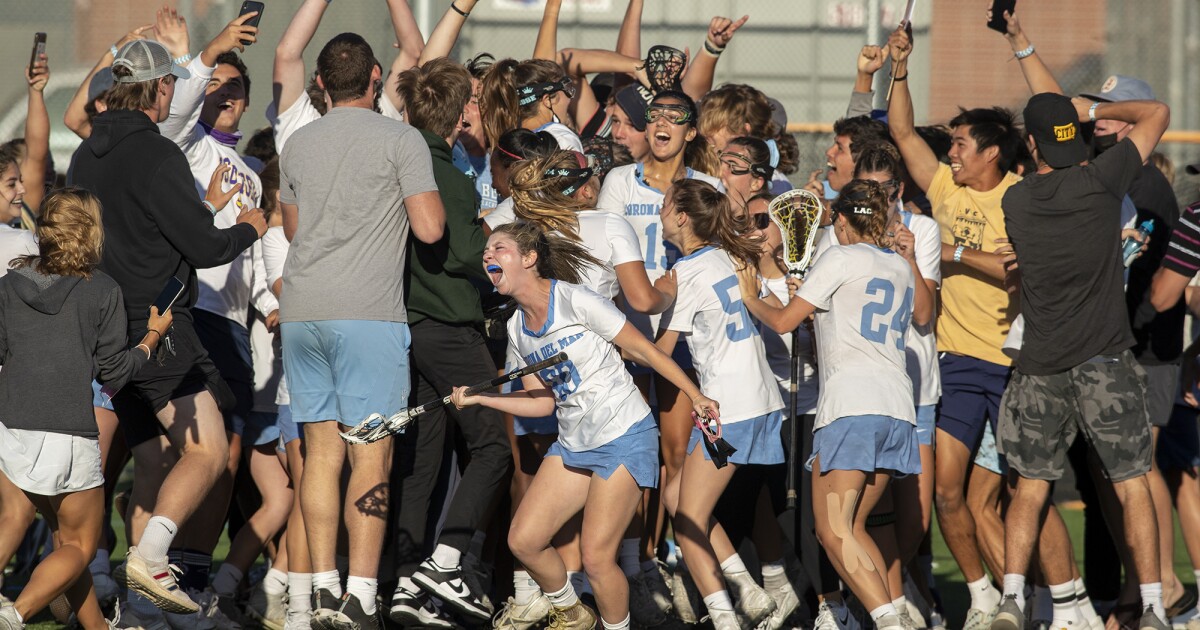 When last season ended abruptly due to the coronavirus pandemic, the Sea Kings were the top-ranked team in the CIF Southern Section Division 2 poll.

More than a year later, the Sea Kings finished the job.

“There is no trophy that looks like this in the world,” CIF Assistant Commissioner Thom Simmons said during a trophy presentation at midfield.

Simmons added that girls’ lacrosse has been a CIF sport for 16 years, but the threshold of participating schools was recently reached to allow for section championships to take place. Last season would have been the first before the pandemic sidelined all spring sports.

“Before the game, I took the girls into our gym where all the banners are held,” CdM coach Jessica Murray said.

“I said, ‘Look around. What don’t you see? No CIF girls’ lacrosse banner, and that’s not because we’ve never won it. It’s because it’s never happened, and let’s be that team that brings it home first.’”

Senior Shelby Glabman scored two goals, and Abby Grace, Elysia Samen, Belle Grace and Megan Schafer each had one goal for CdM (17-5). Kate Kittleson also had a pair of assists.

“It feels really good,” Garcia said following the win. “We’ve worked really hard this season, and especially because it was a weird season, I think it all paid off in the end, and we’re really excited about it.”

The sideline emptied out onto the field as time expired, spectators rushing out to congratulate the Sea Kings in front of their own net.

“It gives a lot of motivation to know that we have supporters,” Garcia said. “It’s not just us. It’s the whole school.”

Corona del Mar held a 5-4 lead at halftime. The Sea Kings were finally able to get some separation midway through the second half.

Canyon (18-6) hit the post at one end. Kittleson picked up the rebound and sent it ahead to Glabman, who scored on the counterattack.

“That was the best feeling ever, and I want to just thank our goalie Ellie Spotts,” Glabman said. “She’s amazing.”

Spotts, a junior, made six saves, including four from the free position.

Support our sports coverage by becoming a digital subscriber.